Getting To & Around Colombo

Due to it being on a strategic route in the Indian Ocean, Colombo hosts one of the busiest ports in South Asia, and was known to ancient traders 2,000 years ago. Today, the city is the central point of the country’s activities and is home to the majority of country’s restaurants and entertainment venues. Just like another typical South Asian big city, Colombo is congested, noisy, busy, and vibrant with a mixture of modern life and colonial buildings. It is the financial centre of the island and a popular tourist destination. 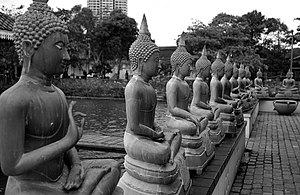 For the best weather, visit during the north-east monsoon season, which is November to April. 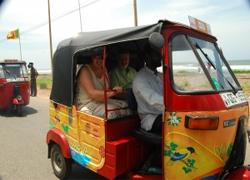 Getting around by Tri-shaw (Three wheeler, tuk-tuk) is most convenient. Most three-wheelers do not have any meters fitted with them and so you have to always negotiate and agree on a price before you take a trip. But it’s best to hail a meter taxi (identified by the words “Meter Taxi” on its windshield) that is traveling in the direction that you need to go instead of hiring one from the parking area or the tuk-tuk stand. The meter taxi, costs Rs 50 for the first kilometre and Rs 30 for every additional kilometre plus waiting fees.

Colombo has an extensive network of buses going around the city/region. It’s fairly easy to find the right one by asking locals or your accommodation. Fares depend on the type of bus and distance. Prices start usually at 10 LKR. Traveling by bus is an adventure itself!

The Sri Lankan Tourist Development Authority also operates its own fleet of ‘tuk-tuks’ around Colombo which are tourist friendly and metered to ensure that travellers are aware of the price being paid. Tourist board tuk tuks are distinguishable by their unique paintings. These three-wheelers can be booked 24 hours a day by calling 0712 500 800 or 0772 299 299.

Taxis are also a good mode of transportation. There are ‘Tata Nano’ cars in service nowadays and the charges start from Rs 40 per kilometre with air-con and it is also a safe and convenient way to travel. Taxis are much safer than a three-wheeler. The tuk-tuks also offer their service for a fee of Rs 30 per km and do not forget to go for the ones with the “Metered Taxi” name board in front. Others may not have the meters running. Uber is available in Colombo with options for smaller cars (Go and Zip), as well as UberX, but XL is not available. A local ride-sharing app called Pick Me allows to order everything from a tuk tuk to a van, although there have been reports about the app not working for all users.

Car Rentals is also a possible for travellers to hire car with or without a driver. Companies like Malkey Rent A Car offer such services based on Colombo.

Mount Lavinia is a great place to be. The beach and the friendly people always draw visitors there and keep them for a while. Unlike the South of the island, Mount Lavinia is about 20 minutes away from the city and entertains a good deal of nightlife. Along the beach are a variety of restaurants that serve liquor alcohol have great food catered to suit every budget. The variety of the beach spots themselves are interesting, from nice little coves for a quiet chat a and a drink to well lit, busy places with dance floors, music courtesy of a live DJ and well stocked bars. Try Jo Jo’s, a quiet little place where they serve pretty decent food and drink and has a nice homey feel to it. The owner Mr Jo, Jo, (Mr Nihal) better know, is a nice person. Buba, on the other side of the Mount Lavinia Hotel which divides the public beach is also popular.

Mount Lavinia also serves as the gay district of Colombo. Although not home to any gay bars, it is a very gay friendly town and always plays host to Colombo’s Gay Pride week in June. Do not be surprised if some bars have the rainbow flag flying on the beach.

For those night owl’s Colombo’s nightlife is on par with most other Asian destinations and feature a number of nightlife establishments, that offer decent music and drinks, served in a pleasant atmosphere. The major hot spots as of February 2013 include the Amuseum and My Kind of Place at the Taj Samudra, Kama (near the Ramada Hotel), Silk (near independence Square) and R&B on Duplication Road.

Expect the music to range from 80’s retro to modern chart toppers as elegant partygoers dance the night away sipping the poison of their choice. Most clubs close around 04:00, R&B perhaps a little longer after.

Most nightclubs may charge admission and smart/casual dress is encourages with longs/shoes a must.

After a night out, some people will end with a late night snack, try e.g., Hotel de Pilawoos along the Galle Road in Kollupitiya to enjoy a Chicken Roti (chicken and cheese wrapped in a roti) followed by an iced Milo (sweet chocolate and malt flavoured drink)

Colombo’s cheap accommodations in the centre of town apart from the famous YMCA (containing a gay bathhouse) are mostly concentrated along the road opposite the Colombo Fort Railway Station. Many rooms are available but with shared bathrooms. These, however, tend to be dirty and dingy affairs that even seasoned travellers are unlikely to tolerate.

Moving south along Galle Rd., one can find a lot of more reasonable housing. Around Kollupitiya, you will still be dealing with air-conditioned concrete boxes where a sleazy clerk will tell you that they have a “budget single room for only 57 dollars”. Further down south, prices and people will get more reasonable. There are quite a few small hotels in the side streets off Galle Rd. in Wellawatte area. If you continue south and get as far as Mount Lavinia, there will be hundreds of small guesthouses, some of them very affordable, in a quiet old-fashioned area with a lot of greenery and right by the sea (the only problem being that it’s far from the centre). As of May 2014, typical costs were Rs 1,000-2,000, depending on the room quality. Buses 100, 101 and perhaps some others go down Galle Rd. from Colombo Fort station (Rs 20 to get to Wellawatte).

Colombo is like most other South Asian capitals. Although, it is not as dangerous as one would think, tourists should be very vigilant. Many first time visitors to Colombo find themselves falling victim to scams and touts, however, seasoned visitors to Sri Lanka are rarely scammed and it is very simple to avoid being a victim of scammers as long as you take precautions such as:

Once you are past the scammers, Colombo is a far more welcoming destination than other South Asian cities. Certainly single women, although not advised to explore every nook and cranny of the city on their own late at night, will not find the pestering attentions of leering men. Sri Lankan women are also very “western” in their dress sense, so it is very normal to wear skirts, tank tops, etc. You may get a few whistles and hellos from bored school boys, but they are more friendly and not meant to be threatening, so just ignore it and they will leave you alone.

The civil war that once raged is now long over, with much development occurring since. The country is now free from terrorism and tourists needn’t be afraid of that aspect.